George was laid to rest in the military cemetary outside Warloy, on the north side of the main road connecting Warloy with the front.

From a guide to Somme cemeteries:

Warloy-Baillon.—There are two cemeteries at the village of that name. The Communal Cemetery is on the east of the village and the Extension is in an apple orchard on the eastern side of the cemetery. The apple trees around the graves, in blossom on this spring day, made the burial ground very beautiful. All the cemeteries of France and Belgium have in common a noble simplicity of design, but each one has some particular feature. One is beautiful with orchard trees; another is graced with rose trees; of another sentinel poplars are a feature; of another the shroud-like cypresses. In every case the planning of a cemetery, its alignment, the site of the Cross of Sacrifice, and the Stone of Remembrance, its plantations and walls, are designed by the architects to harmonize with the natural features of the country. Not often on the French and Belgian sites has it been possible to attain the supreme loveliness of some of the Italian cemeteries, but all are beautiful. The first British burial took place in the Warloy-Baillon Communal Cemetery in October, 1915, and the last on July 1st, 1916. By that date field ambulances had come to the village in readiness for the attack on the German line, five miles away, and the Extension was begun. There are buried in the Extension 857 soldiers from the Home Country, 318 from Australia, 152 from Canada, and 3 unknown. The Communal Cemetery records 46 British burials. 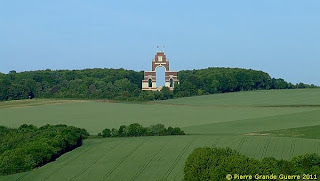 The story of the post-war design and maintenance of British War Memorials is an interesting one. The short documentary linked below is from the Thiepval Visitor Centre and it provides the background to the creation of the Imperial War Graves Commission (later the Commonwealth War Graves Commission). It also desribes the building of the massive Thiepval Memorial, the largest British War Memorial. Thiepval remembers more than 72,000 British and Imperial soldiers who died on the Somme and who have no known grave. Located on the high ground in the centre of the Somme front, at the very place that was assaulted by George and his Salford mates, it can be seen from both ends of the 25-mile battlefield.

Another generous GWF member volunteered to take photos of George's grave for me when he travelled to Warloy to visit his Grandfather's final resting place last month. I asked for a close-up of the inscription at the base, as in previous photos I had seen, it was obscured by a small shrub. UK families were allowed to add a small inscription to the stone as long as they paid a per letter fee. Interestingly, the Canadian government levied no such charge. 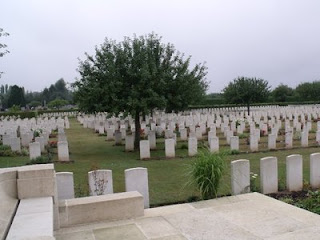 Warloy is a very beautiful and quiet place. As I very much doubt whether anyone from my family has ever been there, a trip is on my own personal "bucket list."

Strangely, if George had survived and I had met him when I was young while visiting the UK, I likely would not have paid much attention to another elderly relative. But given the tragedy of his death at 19 years in such a major historical event, he has come to fascinate me. I want to know more about him and it frustrates me that every avenue for getting more information likely closed decades ago.

But George has also opened a new area of interest to me. There were millions of "Georges" in the Great War and each one has his or her own interesting story to tell.

I would also like to have time to properly search the archive of George's local paper, The Rochdale Observer, to see if there is a death notice with photograph. I have a photo of his dad but not him. Finding a photo of Geurge has become my "Holy Grail." If I do find a photo, George will be the subject of one of my sculpted busts.

I am not alone in wanting to know more about my family's experiences in the Great War. As the centenary approaches, many tourists will return to France to see where their ancestors suffered, endured, overcame, or fell. Governments and interest groups are already planning centennial activities. I can't explain the strong family connection I feel to George and the Somme but it is there. My research on George has opened other avenues of study. He was my maternal grandmother's brother. My maternal grandfather also served, as did his two bothers - one was at Gallipoli and the other was killed in action at Longueval, also on the Somme, two years after George. His remains were never identified and he is remembered on the Vis-en-Artois Memorial. I will learn each of these stories in whatever detail I can. 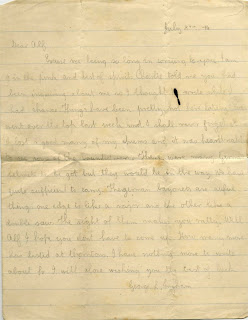 George's poignant letter is the thing that speaks directly to me from the past. Each small detail, like the tiny brown burn on the letter that likely resulted from candle wax as he wrote in the dark trench at Donnet Post, the child-like handwriting conveying such mature thoughts, and his fearless tone, all make the letter a bridge to a time and place in my imagination. It makes me admire this young man I never got the chance to meet. I am proud to have him as my ancestor. Thank you again Jackie Waters!


In Memorium - George Leonard Ingham
Posted by Colin Fraser at 7:05 PM No comments: