The 3rd Salfords' attack on Ovillers is thoroughly described in the Battalion Operations Report and War Diary entries that are excerpted below. The Ops Report had this useful trench map attached (right). The fact that I had a copy of the War Diary and Ops Report for these difficult days is due to the generosity of a fellow member of the Great War Forum (GWF), who offered to go to the British National Archives at Kew to digitally photograph these documents for me, despite the fact that he had never met in person. This type of peer support is what makes it valuable to belong to internet interest sites like the GWF.

The photo below shows Ovillers-la-Boisselle as it appeared around July 1916. No buildings were left standing - just shattered walls, pulverised bricks, other housing wreckage, and interlocking trenches and subterranean fortifications.

The map below was based on the offical trench map for the area and the period, with battalion movements added by me. The information came from the Ops Report map attachment shown above, which is quite difficult to read. The clearer version below shows the positions of each of the 19th Lancashire Fusiliers' (3rd Salfords') remaining pair of combined infantry companies, as well as the axis of advance of the supporting 2nd Battalion of the South Lancashires as it moved up a communication trench from La Bosselle to the south. 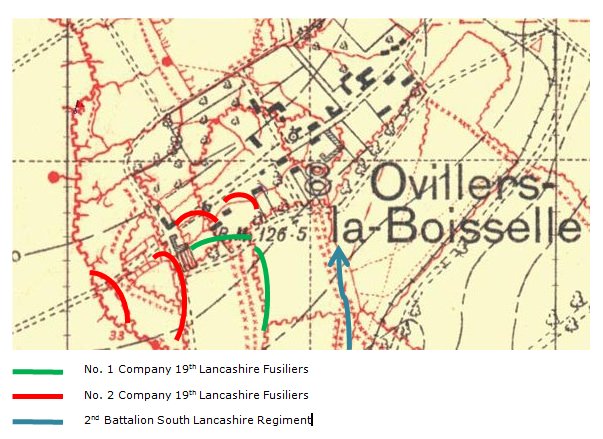 One can never understand the pure horror of the trenches at Ovillers. But this photo of British machine gunners in gas helmets in those trenches does go part way.


The map below is based on the extract from the Operations Report map that is shown at the top of this page. Number 1 Company held the line 82 - 83 - 77 to point X with 4 platoons. Number 2 Company's 2 platoons held the line Z Y with 2 platoons in reserve along the line 33 - 42 - 64 on the trench map. The objective of the attack was to take Point 18 (just to the left of the "la" in la Boisselle). The attack actually passes beyond this point until it stalled at the blocking point located just to the left of the "O" in Ovillers on the map. 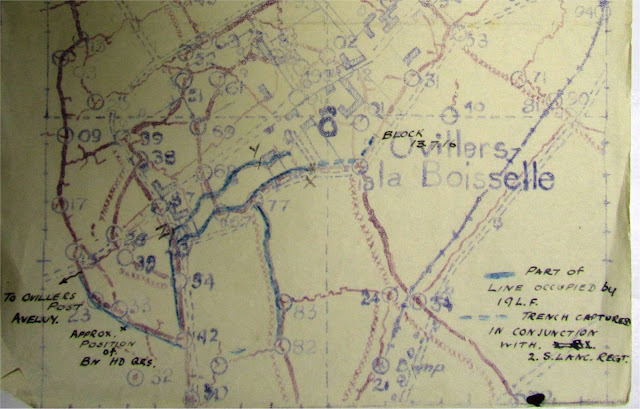 The following detailed Report on Operations was likely penned by Battalion Intelligence Officer Geoffrey Bache Smith and it was signed by Lt. Col. Graham. In it, one can glean a sense of the seriousness of the fighting as the two British infantry battalions, already both savaged on July 1, sought to take a key length of German trench to the south of the village.

On the 12th July 1916, the 19th Lancashire Fusiliers forming part of the troops occupying the captured German trenches WEST OF OVILLERS were ordered to push further EAST and capture as much ground in the village as possible, particularly strong point 18 almost due SOUTH of the Church.

The Battalion owing to the casualties sustained on the 1st July only consisted of two companies under the command of Captain Haywood and Palk.

No. 1 Company under Captain Haywood occupying the southern part.

No. 2 Company under Captain Palk occupying the western portion.

The 16th Lancashire Fusiliers prolonged the line occupied by No. 2 Company on the west side of OVILLERS.

The 2/South Lancs. were advancing north down a communication from LA BOISELLE. 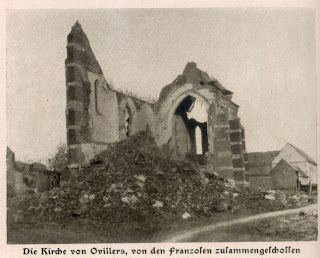 The plan of attack was that at 11 pm on the 12th, No 1 Coy. 19th Lancashire Fus. should attack point 18 and at the same time No 2 Company 19th Lancs. Fus. and also strong patrols from the 16th Lancs. Fusiliers should push EAST and endeavour to gain as much ground in the village as possible. At the same time arrangements were made with the 2/South Lancs. that in the event of No. 1 Coy. 19th Lancs. Fus. being unable to capture Point 18 at 11 pm a further combined assault should be made at 3 am. The orders as above set forth were carried out. No. 1 Coy, to the trench leading to this point being blocked by fallen trees and other impedimenta, had great difficulty in progressing. However, in spite of these difficulties, the storming parties moved on until they came to the enemy’s barricade. Here they were subjected to heavy machine gun fire and showers of bombs, and forced to retire. Another attempt was made with no better result. In the meantime No. 2 Company under Captain Palk pushed forward and succeeded in gaining ground almost up to the Church and dug themselves in and further consolidated their advance.

At 3 am on the morning of the 13th No. 1 Coy. resumed its attack on Point 18, two assaults were delivered and in the last one they succeeded in rushing the barricade, but were immediately overwhelmed by machine gun fire from guns posted a short way in rear of the barricade. In the meanwhile, the 2/South Lancs. advanced down trench 70 – 34 and leaving the trench attacked the enemy’s strong point from the rear, this manoeuvre was completely successful and point 18 and some hundred yards of communication trench running EAST were captured. 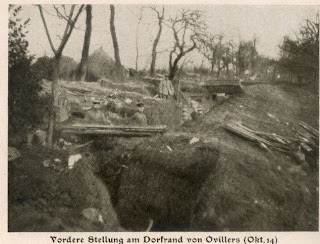 At about 6 am, the enemy, having brought up reinforcements, counterattacked driving the 2/South Lancs back through point 18, but this success was only momentary. The 2/South Lancs. again pushed forward their bombing parties and with the aid of machine gun fire from N. 1 Coy. 19th Lancs. Fus., the enemy were forced back and point 18 was finally seized and held permanently. During these operation a party of the enemy tried to retire across the new front occupied by No. 2 Coy. just south of the church and coming under the machine gun fire of this company surrendered to Captain Palk, who went out personally and brought these men in – although the Germans had begun to turn their own machine guns on to them. Thirty seven prisoners belonging to the Garde Fusiliers Regiment were thus captured by No. Coy. The 2/South Lancs. making some more prisoners including an officer.

On the morning of the 14th further counterattacks were made by the enemy but were driven off without any loss of ground.

During the above operations 2/ Lieuts. Longley and Mahoney were killed and Lieut. Young wounded, all belonging to No. 1 Coy. Some 40 O.R. were either killed or wounded.

During the four assaults made by No. 1 Company on point 18, bombs and rifle grenades were used and nearly all the bombers of this company were either killed or wounded.

The following officers took part in these operations – 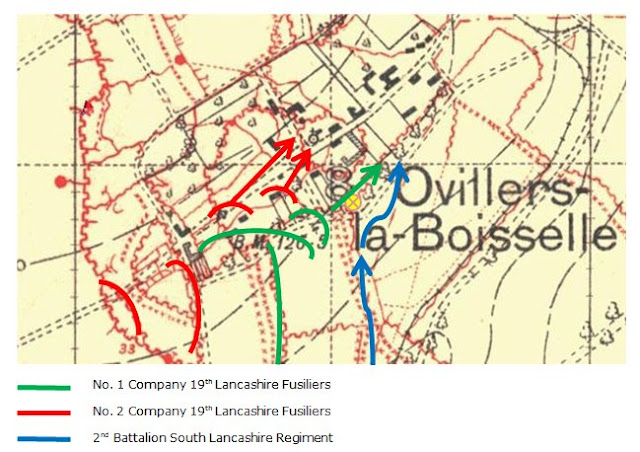 The ferocity of the fighting that Number 1 Company was involved in can be guaged by the fact that the 19th Battalion had to make four frontal attacks on point 18 (the yellow circle with the cross in it). The last two were made in the dark at 3 AM. Night fighting is the worst type of fighting imaginable, especially in the days when the only night vision assistance was a flare or the blast of a grenade.

The officer casualty statistics speak volumes. After George's A Company suffered 100% platoon commander casualties on July 1, losing all 3 of its young subalterns killed, his Number 1 Company suffered the loss of 75% of its replacement platoon commanders on night of July 12/13. These loss rates make very apparent the limited service life of a second lieutenant in the trenches. While there is no absolute assurance that George was a member of the reorganised Number 1 Company, it is very likely that he was given that almost all of the battalion's casualties in Ovillers were inflicted on Number 1 Company by the defending elite German Garde Fusilier Regiment.


The Battalion War Diary adds some additional perspective on the action in Ovillers. From the diary, we know that the 19th Lancashire Fusiliers were temporarily attached to Brigadier General Yatman's 96th Brigade and were in the trenches with their sister battalion the 16th Lancashire Fusiliers (2nd Salfords) on their left. Late on the 13th, the War Diary notes that the battalion was relieved by the Dorset Regiment and it withdrew to Bouzincourt. The diary notes that casualties to the end of the 13th were 2/Lts. Longley and Mahoney killed and 2/Lt. A.N. Young wounded. Other ranks casualties were 8 killed and 41 wounded.