The 32nd Division's attack on the Leipzig Redoubt began at 7:30 AM sharp, the same time as the rest of the Somme attack spread across a 25 mile long frontage. Platoon and Company commanders' whistles blew, signalling the infantry to go "over the top" and to advance all along the Somme front.

Facing Thiepval, 96th Brigade frontally attacked the defences of the town. The 1st and 2nd Salford battalions quickly realized that the wire was for the most part not cut by shell fire as planned, and they were pinned down in "no man's land" by unremitting German machine gun fire. Their sister battalion, the Tyneside Commercials (16th Northumberland Fusiliers) advanced across the open area between the British and German trenches while kicking a football in front of them, all in the spirit of good sport. All of these battalions essentially got no where and languished in the open, unable to advance or retreat. The following BBC documentary tells the wider story of the Somme while fousing on the 2nd Salfords at Thiepval.

South of the town of Thiepval, 97th Brigade attacked the Leipzig Redoubt as planned. Men from the 17th Highland Light Infantry crept forward at 7.23 a.m. readying themselves to charge the German trenches even before the final British hurricane artillery barrage had ended. The 16th battalion of the same regiment was on their left but sadly suffered the same fate as 96th Brigade's troops. The 17th advanced to within about 40 yards of the German front line, and when the barrage lifted at 7.30 a.m., they were well positioned to rush the German works before the defenders could emerge from their cover and commence fire. They took the Leipzig Redoubt's first trench line, catching many of the Germans still in their dugouts in the quarry at the centre of the fortress. The Highlanders attempted to reinforce their success by advancing deeper into the German defences to take the second line 'Hindenburg Stellung' but they were forced back to the front line trenches by German bombing and accurate machine gun fire. The 2nd  King's Own Yorkshire Light Infantry got a few men into the redoubt behind the 17th but betweent hese two battalions there were insufficient troops to hold this ciritical German fortification. 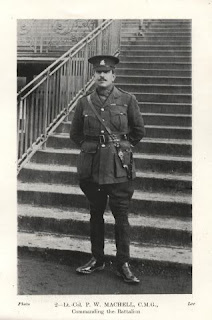 On their right, the 11th Lonsdale Battalion of the Border Regiment was committed to support the attack on the redoubt. Emerging at 8:30 A.M. from the cover of Authuille Wood, they were mercilessly machine gunned from the Nordwerk, a German fort on the Oviller spur that shold have been taken by the 8th Division, and they dropped in droves. As elsewhere across the front, the 8th Division had run into a literal wall of machine gun fire and could make no progress, leaving the Nordwerk machine guns to fire from high ground at long range into the right flank of any infantry advancing on the redoubt. The Lonsdales took horrific casualties with over 500 men falling, mostly wounded. Their popular Colonel (Machell) was mortally wounded almost immediately in the advance. He is buried at Warloy where George is interred.

The plan was for 14th Brigade to be split into two parallel columns for its supporting attack on the Leipzig Redoubt. The left column was lead by the 1st Dorsets followed by George's 19th Lancashire Fusiliers. They were supplemented by supporting Stokes guns and Royal Engineers. The whole column was under the command of Lt. Col. Graham of 19th. 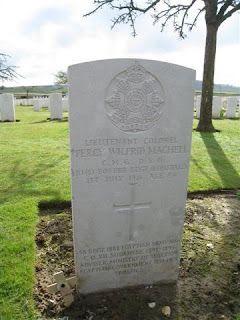 As Michael Stedman wrote in his book on Thiepval: "Perhaps nothing in the British Army's battles at Thiepval could match the dreadful farrago which subsequently unfolded across the terrain littered with the bodies of the Lonsdales." The 14th Brigade did not expect to have to assault the south face of the Leipzig Redoubt under fire as they crossed "no man's land" in the open. Nor did they expect to come under accurate and concentrated German enfilading machine gun fire as they moved up to the British frnot line trenches. Yet his is precisely what occurred - both to the leading Dorsets battalion and to the Salfords, as the Dorsets led the column forward, a survivor recalled "we  took the track in rear of the batteries by Brooker's Pass, turned left on and over the road, into Authuille Wood and followed the Dumbarton Track … We had a number of casualties there, and passed by a number of killed and wounded from our leading companies. We had a terrible dose of machine gun fire sweeping through the wood, could not understand why."

Fifty yards inside the northern edge of Authuille wood, there is a deep, wide depression barring the way, which Lieutenant Douie, author of a very famous Somme memoir,  described: "I came to a bridge over a defile which our plan of attack required us to cross… the bridge, marked with unerring accuracy by the German machine gunners, was heaped with our dead and wounded so as to be almost impassable; a platoon forty-eight strong on one side emerged with a strength of twelve." And that was inside the wood, well inside the Birtish lines. The Dorsets and Salfords still had to get to the British front line trench after exiting the wood. The Dorsets emerged from the wood at about 8:45 and Sergeant Major Shephard described his crossing of the gap between the wood and the British front line: "I saw the last platoon of A Company going over the open ground in front of the wood to our original front line trench, a distance of about 120 yards. Half of this platoon were killed and almost all of the remainder wounded in the crossing and I at once realised that some part of the attack had gone radically wrong, as we were being enfiladed by batteries of enemy machine guns from the ridge to our right front held by the enemy."

In an exact replica of the Lonsdales' suicidal attack, they proceeded to advance over open ground toward the redoubt. Perhaps 60 demoralised men made it. The rest were killed, wounded or pinned in shell holes.

Colonel Graham did his utmost to avoid the same dsiaster befalling his battalion. He ordered a smoke barrage by his supporting Stokes guns to obsure the line of site from the Nordwerk. Rather than allowing his battalion to advance at the walk with shouldered arms as per divisional orders, they were sent forward over the intervening open ground between Authuille Wood and the British front line trenches in platoon rushes. George's "A" Company led, followed by "B" Company. Only about half of "C" Company had advanced before "A" Company's C.O. (Lt. Huxley) sent back word to hold the remainder of "C" Company and all of "D" Company back as the British front line trenches were so full of disorganised infantry and wounded from previous battalion attacks that there was no more room in them.

10.30 a.m. 1st party of A Company, 19th Lancs Fus., left exit of wood closely followed by parties of B and C Companies.  Casualties during this move were severe; all caused by machine gun fire.

11.5 a.m. Message from OC A Company with information that British front line trenches were congested with remnants of preceding battalions and dead and wounded.

CO delayed advance of D Company which was ordered to move up communication trench – Rock Street.  Meanwhile parties of A, B and C Companies under Capt G Hibbert advanced to the enemy front line which was lightly held by personnel of 1st Dorsets.

11.15 a.m. Troops in front line (British trenches) were organised into their units and prepared to advance in support of troops in enemy trenches but under orders of GOC, 14th Brigade, remnants of this battalion and 11th Border Regt were ordered to withdraw.

At this point, the battalion went "over the top" from the clogged British front line trenches. George, as a member of 3 platoon "A" Company, would have been in one of the first groups sent forward.

The advance from our own front line was carried out in waves.  1st wave led by 2nd Lt H W Huxley failed to reach enemy trench owing to heavy casualties.  2nd wave under Capt G Hibbert and 3rd wave under Lt H Musker and 2nd Lt R L George succeeded in entering enemy trenches.  Capt Hibbert took command of men of 19th Lancs Fus in German lines and held the right flank, with the 1st Dorsets on left, by bombing.  Enemy several times attempted bombing counter attacks but were repulsed. The supply of bombs in these trenches ran short and Capt Hibbert had to resort to Boche bombs which were used effectively.


3.30 p.m. Lt Musker returned to Battalion HQ (in Russian Sap) and reported situation and position held by our troops.  2nd Manchester Regt had now come up to occupy this captured portion of the line.

7.30 p.m. Nothing of importance occurred until when the battalion was ordered to withdraw  to Authuille defences.  This was carried out and completed at 10.30 p.m. with the exception of Capt Hibbert’s party which was relieved at 10.30 a.m. 2nd July.

2nd July Authuille defences – Companies were reorganised and casualties estimated at 7 officers and 375 other ranks. 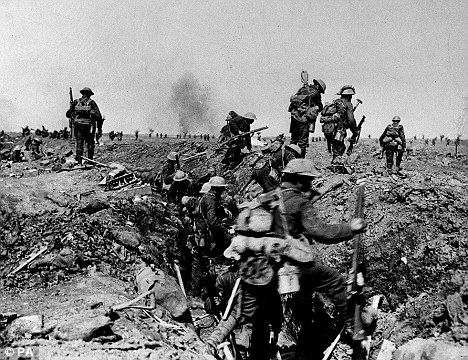