The Battle of the Somme came about as a result of the British undertaking to remove pressure from the French to indirectly assist in their defence of Verdun, where the Germans were attacking ceaselessly and somewhat successfully. The French were feeding division after division into the Verdun defence and these were being ground up as fast as they were committed. Verdun took on the well-earned title "the mincer." The British leadership realized that the something had to be done to distract the Germans from Verdun to avoid a French collapse and to show the French that the UK and its empire were doing their fair share as an equal ally.

While this blog is not intended to be a study of the Somme, it is useful for the reader to understand the overall context of the battle. So this post is intended to provide additional background. The Somme battle took place between July 1, 1916 and the end of November 1916, only ending with the approach of winter and the exhaustion of both attackers and defenders. When it was over, the British army had lost about 600,000 men, almost 60,000 within the first 2 hours on the first day.

The Somme River derives its name from the celtic term for "tranquility." It flows east-to-west in Northern France and it empties into the English Channel. In 1916, it formed the effective operational boundary between the French and British armies.

Today, the Somme is remembered by Britain and the Commonwealth countries as their worst single battle of World War I, although many in Germany and France consider Verdun to be worse. The first day on the Somme still ranks as the bloodiest single day in British military history. 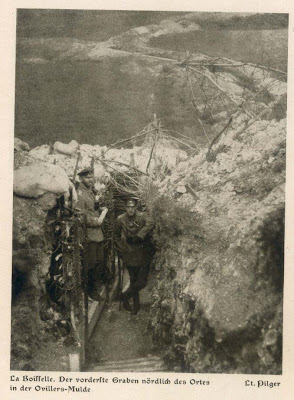 The German trenches facing the British forces on the Somme had been established on high ground overlooking the British positions and had been occupied by the same troops since late 1914. The Germans had a lot of time to construct elaborate and very well-engineered dug-outs and bunkers dug deep in the chalk along the low range of ridges overlooking the British trenches. Various small villages had been incorporated into the defence and these were fortified as strong points, many with newly dug or expanded connecting cellars and underground forts. Extensive wire entanglements and well-sited machine gun positions, with interlocking fields of fire, completed the defence.

To assist in ensuring success, the British plan was to pound the German trenches in an unprecedented week-long artillery bombardment. It was generally felt that the size and immensity of the artillery preparation would be sufficient to allow the British infantry to slowly walk across no-man's land with shouldered rifles and take possession of the German field works. Every German defender and every other living thing was fully expected to be dead or so demoralized to be incapable of fighting.

In the map below, one can see the planned direction of the attack with the central axis running along the old Roman road from Albert to Bapaume. One can also see the concentrated belt of fortified towns in and directly behind the German front lines, including the central towns of Thiepval, La Boisselle and Ovillers la Boisselle (also known as Ovillers). The three battalions of the Salford Pals were part of the 32nd Division, which had the overall objective of taking Thiepval and several fortifications beyond.


The first day's attack was a completely British affair, except for the tragic inclusion of the Newfoundland Regiment in the Beaumont Hamel sector. Newfoundland had not at that time joined Canada and was seen as a separate Dominion force. The Newfoundland Regiment was part of the British Army. It took 90% casualties in its attack at Beaumont Hamel, including the loss of all of its officers, many of them potential leaders who could have assisted it in gaining independence later. Fourteen pairs of brothers died in action in an hour. Some think that Newfoundland's decision to join Canada would never have happened without the catastrophe at Beaumont Hamel and while the rest of the country celebrates July 1 as Canada Day, Newfoundland memorializes its disaster of the Somme on that same day.


The British attack began at 7:30 AM on the clear Saturday of July 1. The artillery bombardment ended with an increased hurricane of shells in the last few minutes before 7:30. Then there was silence, except for the singing of sky larks. The officers' whistles blew and the leading waves of British infantry climbed out of their trenches and stepped off in their attack, crossing no man's land at a slow walk.A slow walk to allow the under trained volunteers to remain under their officers' control and in part due to the heavy loads carried.


What happened on the first day of the Somme has taken on an almost mythical stature and it has been said that it still represents a scar on the British national psyche. The German machine guns were not suppressed by the artillery bombardment and they almost immediately opened fire on the slow moving khaki-clad infantry as they appeared in the open ground of "no man's land." In may places the German wire had not been cut as intended by the exploding shells. The British battalions suffered crippling casualties but advanced with incredible valour anyway. The Newfoundlanders' Divisional General said that:

"It was a magnificent display of trained and disciplined valour, and its assault only failed of success because dead men can advance no further."

Churchill famously wrote that the British plan on the Somme had been "to fight machine-gun bullets with the breasts of gallant men."

A total of 57,470 British soldiers became casualties on the first day, of whom 19,240 were killed immediately or died of wounds. Worse, many of the battalions committed were "Pals" or "Chums" battalions from Kitchener's New Army. Many of these units were effectively destroyed as useful military formations. A common saying at the time was "that which took two years to build was destroyed in a mere ten minutes." When the pals' casualties were reported back to the UK, whole communities were plunged into mourning and many families had to face multiple losses - father and sons, cousins, brothers, and uncles.


The Somme battle ground on through the summer of 1916. Some consider the battle a costly failure for the British army while others see it as a necessary learning tool in its development into a war winning force, a major factor in the saving of Verdun, and a major factor in attriting and demoralizing the German Army. Current scholarship has taken more of a view that the Somme was a decisive step toward grinding down the German army and positioning the Allies for eventual victory in 1918.

Either way, the three battalions of Pals from Salford played a large part in the battle and its clear that George was in the midst of the worst of it.