The plan for the 32nd Division's part in the 4th Army attack on July 1, 1916 was similar to those of other divisions along the 25 mile-long front. Go over the top and advance at a walking pace to  take the Germans' first three trench lines. No resistance would be possible because all the German defenders would be dead or shell shocked into complete incapacity by the unprecedented artillery bombardment. All three of the Salford Pals battalions in the division were to play major roles in the events of the day.

The 32nd Division was a New Army formation largely comprised of locally raised "Pals" units. It was a predominantly recruited from the North of England and from Scotland, although locally raised units from Birmingham and Bristol were also in the structure. It was part of X Corps under Lt. General Morland, acting with its sister 36th Division in a concerted Corps attack on the Thiepval Sector at the centre of the Somme battlefield.

The three brigades of the division were organized as follows:


As the map above shows, the 32nd Division was arrayed directly in front of the town of Thiepval. On the left, the 1st and 2nd Salfords (15th and 16th Service Battalions of the Lancashire Fusiliers) were part of the 96th Brigade, along with the 16th Northumberland Fusiliers from Newcastle and the Irish 2nd Royal Inniskilling Fusiliers (Regulars). They were tasked with attacking north of Thiepval and with taking the town and assisting with the taking of the Schwaben Redoubt, one of the most complex and imposing fortifications on the Western Front.

The 97th Brigade of the Division consisted of the 11th Service Battalion of the Border Regiment (also known as the "Lonsdale" Battalion after the aristocrat who raised it), the 16th and 17th Service Battalions of the Highland Light Infantry, and the 2nd Battalion of the King's Own Yorkshire Light Infantry (Regulars). This brigade was given the role of directly attacking the Liepzig Redoubt, a heavily fortified salient built around a quarry known as the Granatoch to the south of the town of Thiepval.

George's battalion was part of the 14th Brigade. This brigade was 'depth reserve' for the other 2 brigades of the division and it was arrayed in two separate columns. The brigade consisted of the 3rd Salfords (19th Lancashire Fusiliers), the 15th Highland Light Infantry, and unusually for this army, two regular battalions: the 2nd Battalion of the Manchester Regiment and the 1st Battalion of the Dorsetshire Regiment. The plan was for this brigade to pass through 97th Brigade after it had taken the Leipzig Redoubt and for it to penetrate deeply into the rear of the German lines, taking the Germans' Mouquet Farm headquarters complex far in the rear.


Thiepval was possibly the strongest part of the German defences on the Somme in 1916, being built on a significant ridge overlooking the British lines. The German HQ at Mouquet Farm was on even higher ground about 1,500m to the East. Both the Schwaben and Leipzig Redoubts were on dominating land masses, to the north and south of Thiepval respectively. The lie of the land allowed the siting of machine guns with clear lines of sight to the British lines of advance and with excellent interlocking fields of fire. The Leipzig Redoubt was a heavily defended series of trenches and bunkers with supporting trenches, machine gun posts and wire. At its tip was the quarry known as the "Granatloch." Its approaches were covered by machine guns in other supporting fortifications on the Ovillers spur to the south, such as the Wonder Work and the North Work.


On July 1, 1916, while the rest of the British army prepared for a quiet Saturday morning "walk in the park" across to the pulverized German trenches, the Colonel of the 17th Highland Light Infantry (Glasgow Commercials) had other plans. He planned to have his men crawl out to within 40 yards or so of the German front line in the hour before the attack so they would be in position to rush the defences as soon as the artillery bombardment stopped. The plan was to be into the German trenches and on top of the defenders before the Germans could be up from their deep reinforced dug outs to man their machine guns.

Assuming a successful attack by Highlanders of 96th Brigade, the divisional plan called for the rest of 96th Brigade and the supporting 14th Brigade to sweep through the front-line trenches occupied by the Glasgow Commercials to maintain the momentum of the advance. The 8th Division would support on the 32nd Division's right taking the villages of the Ovillers spur (Ovillers la Boisselle and La Boisselle) and as previously mentioned the 36th would attack north of Thiepval on the Division's left.

The 32nd Division had been in the trenches before Thiepval for some months before the Battle of the Somme and many men had already died from artillery fire, sniping and trench raids. These casualties were attributed to what was termed "wastage." One such casualty from 32nd Division was a young 19-year old Irish soldier named Willie McBride.

Willie is recalled more than most of the faceless casualties of the Great War as he was the subject of a very poignant song by Eric Bogle. "No Man's Land" or "The Green Fields of France" has long held a special place for my family. I first heard it sung by a Scottish folk duo, one of whom was a school mate of very dear friends of mine, now passed away and much missed. Roy Williamson and Ronnie Brown, who together were known as "The Corries," perform the song in the video below. Roy, now also sadly passed on, is quite famous in Scotland for his song "Flower of Scotland," which is in the running to be declared the Scottish national anthem should Scotland ever declare independence.


I find it a very big coincidence that Willie McBride, like George, was 19 when he died and that he was a casualty of a sister battalion to George's, 2nd Royal Inniskilling Fusiliers. Willie fell before the Somme battle started but he is buried very close to where the 32nd Division made its doomed attack on July1, 1916.

The words for the Green Fields of France are very moving and could almost be taken as an epitaph for an of the young men who lost their lives on the Somme. In addition, the song illustrates the grip the battle still holds on the collective psyche of the Commonwealth nations that took part.

Well how do you do, young Willie McBride,
Do you mind if I sit here down by your graveside
And rest for a while 'neath the warm summer sun
I've been working all day and I'm nearly done.
I see by your gravestone you were only nineteen
When you joined the great fallen in nineteen-sixteen.
I hope you died well and I hope you died clean
Or Willie McBride, was it slow and obscene.

Chorus :
Did they beat the drum slowly, did they play the fife lowly,
Did they sound the dead-march as they lowered you down.
Did the bugles play the Last Post and chorus,
Did the pipes play the 'Flooers o' the Forest'.

And did you leave a wife or a sweetheart behind
In some faithful heart is your memory enshrined
Although you died back in nineteen-sixteen
In that faithful heart are you ever nineteen
Or are you a stranger without even a name
Enclosed and forgotten behind the glass frame
In a old photograph, torn and battered and stained
And faded to yellow in a brown leather frame.

The sun now shines on the green fields of France
The warm summer breeze makes the red poppies dance
And look how the sun shines from under the clouds
There's no gas, no barbed wire, there's no guns firing now
But here in this graveyard it's still no-man's-land
The countless white crosses stand mute in the sand
To man's blind indifference to his fellow man
To a whole generaation that were butchered and damned. 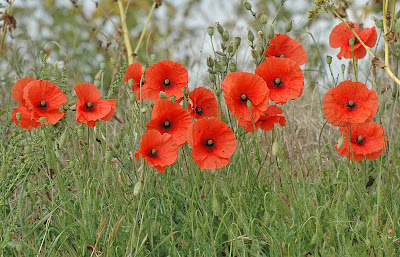